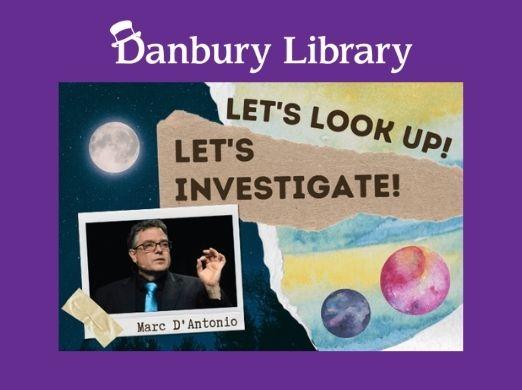 Virtually join Chief Photo/Video Analyst, Marc D'Antonio and discover how the Universe is at your fingertips and thanks to the smart phone revolution it has arrived for everyone, they just may not realize it! Join us! Be amazed! Lets Look Up! Lets Investigate! FREE!
Click here for more information about this activity
Please help us keep this calendar up to date! If this activity is sold out, canceled, or otherwise needs alteration, email mindy@kidsoutandabout.com so we can update it immediately.

THIS IS A HYBRID EVENT (IN-PERSON AND VIA ZOOM)

Please Note: This is a hybrid program, you may attend in person at the Danbury Library or via Zoom. Participants will receive a link to the program via email once they have registered.

Many people want to learn more about Astronomy and the night sky. Further, many people would like to be more critical observers and look for sky anomalies that could turn out to be true UFOs but they think they lack the skills and the equipment. Sure, it can cost thousands for equipment. But read on, all is not lost! If you are one of these many then this talk is for you. We learn the basics of Astronomy and learn about the phenomena that can be mistaken for UFOs and those things that could be actual UFOs. After a solid primer on the stars over our heads, we go down a practical path. That path takes us on a journey through many different applications for smart phones that can be utilized to great benefit in the search for actual anomalies and UFOs. It is true that the Universe is at your fingertips and thanks to the smart phone revolution it has arrived for everyone, they just may not realize it! Join us! Be amazed! Lets Look Up! Lets Investigate!

Marc D'Antonio has a degree in Astronomy and is Chief Photo/Video Analyst for the largest Aerial Anomaly organization on Earth. He is the host of SkyTour Radio on KGRA radio and is the host and creator of SkyTour LiveStream with Marc Dantonio on YouTube where people can go to watch LIVE as beautiful deep night sky objects materialize before their eyes in mere seconds courtesy of very sensitive cameras and the SkyTour Observatory research telescopes.  Marc is the CEO of FX Models, a model making and visual/special effects company specializing in digital/physical models, and organic special effects in the film industry. He has an extensive work history in the Film and Television arena appearing regularly on a number of networks and television shows including "NASA's Unexplained Files" on the Discovery Channel and "What On Earth!" on the Science Channel. He is characterized as the Voice of Science Reason basing his discussions on the science we know with a little bit of speculation on his part. His efforts creating the Aerial Anomaly Detection system, a remote system to detect any advanced propulsion at play in our local universe, with Academy Award winner Douglas Trumbull will attempt to answer the question of whether we are alone. If extraterrestrial intelligence has managed to ply the vast gulf between the stars and reach us, then science should be able to tell us so. Such results will back up the stories we so often hear from those who have encountered something strange ... in our skies.

Please be advised that the Library makes no warranties and/or representations concerning the virtual programs. Your decision to participate in the programs is an express consent on your part to waive any and all claims against the Library which may result from said participation and hereby release and discharge the City of Danbury / Danbury Public Library from any and all liabilities.

Danbury Library
*Times, dates, and prices of any activity posted to our calendars are subject to change. Please be sure to click through directly to the organization’s website to verify.